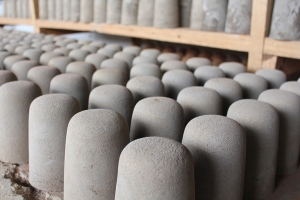 The writer interviews Acting Mayor Geoffrey Formoso on the CWF product inside the production area in Santa Maria town.

SANTA MARIA, Isabela, October 30 (PIA) – The bright future of pottery industry becomes brighter for this Ibanag town when the government operationalized the first-ever production center for ceramic water filter in the country this year.

“It will be our flagship project in the next six months. We won’t leave pottery as an industry as it has been with us for more than a hundred years now,” Geoffrey Formoso, acting Mayor, said.

Early this year, then DOST regional director, now Assistant Secretary Urdujah Tejada, partnered with the local government unit for the CWF technology developed by DOST –  Industrial Technology and Development Institute which provides clean and safe drinking water for use in the countryside where source of water is spring and open water.

The CWF is a candle type ceramic filter with micron pore and coated with colloidal silver assembled into a plastic ware which can provide 1.5 to 2.5 liters of potable water per hour for the user.

DOST region 2 said the unit removes bacteria or parasites through physical filtering, inexpensive yet highly effective and uses no electricity.  With no maintenance cost, the colloidal silver has a life span of up to three years.

“We embrace the technology because we know this is the government’s respond to the changing times. We want to upgrade our ceramics industry as we want people to stay healthy,” Formoso said.

The official admitted that the product is timely as most areas are affected by floods which contaminate safe drinking water. Add to that, he said, is the fact that even underground water is no longer safe for human use.

Aside from the traditional pottery products, the production of CWF will bring additional decent income to the residents. A unit is pegged at Ph450.

Located inside the town’s old gymnasium, workers now produce at least 500 units of the CWF daily. A unit takes about a week to undergo 12 processes for the production of the final product. Formoso sees the old gymnasium as livelihood center for ceramics in his municipality.

Meanwhile, Barangay Cabanuan in Sta. Fe, Nueva Viscaya has availed of the  new product, part of the 231 units programmed by its local government units for residents of the town as a result of a Ph100,000 budget grant by DOST region 2. The program is in partnership with the Nueva Viscaya State University.

Barangay Cabanuan has recorded a high incidence of water borne diseases in the previous years.

DOST Assistant Secretary Urduja Tejada said LGU Sta. Fe is one of the towns assisted  under the Community Empowerment for Science and Technology, a banner program of Secretary Mario Montejo.

Benjie Sagadraca De Yro is a journalist who is deep into progressive theater and preservation of culture and the arts. Known for his award-winning government documentaries in his region, he immersed himself into film workshop for students in his bid to discover local talents for the independent film industry local and abroad. He has three children and four grandchildren and lives in Annafunan West, Tuguegarao City, Cagayan, Philippines. View all posts by benjdeyro